The Medak diocese is the single largest diocese in Asia and the second in the world after the Vatican.

The cathedral was built under the stewardship of Reverend Charles Walker Posnett who was driven by the motto My best for my Lord. Rev. Posnett arrived in Secunderabad in 1895. He first ministered among the British soldiers at Trimullghery. Unsatisfied with the army work, he launched forth into villages. In the year 1896, Rev. Charles Walker Posnett visited a village called Medak and built a bungalow thereby staying in dock bungalow. There was no railway route to Medak in those days. The journey of 60 miles (97 km) from Hyderabad had to be done on horseback and Rev. Posnett could do it in a day. There were then hardly two hundred Christians in the whole of Medak area. When he came to Medak, there was a small tiled house as the place of worship. As the number of Christians increased, he felt the need for expanding the church building. Rev.Posnett soon raised a moderate structure on that very spot just enough for the Christian community within the Mission Compound in the traditional shape of a church. He thought it was not a worthy place for divine worship. He started building the present Cathedral in 1914 on a sprawling 1,000 acres (4.0 km2) of land in Ghusnabad area. The foundations for the new church were laid at the beginning of the year 1914. During the early part of the 20th century, Medak district was reeling under famine and Rev. Posnett, in order to provide succor to the suffering masses, gave the masses employment in the construction of the church instead of running a free kitchen. The construction work on the cathedral went on for 10 years. The cathedral was consecrated in 1924 by Rev. Posnett expressing his grateful thanks to God for mitigating the sufferings of the people. When several Christian groups became re-united as the Church of South India, the church became the cathedral church of the diocese of Medak in
October 1947. 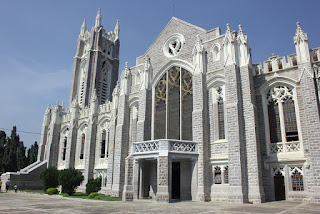 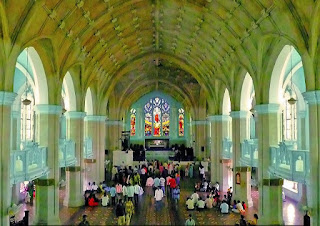 The cathedral is 100 ft (30 m) wide and 200 ft (61 m) long and conforms to the Gothic Revival style. It can accommodate about 5,000 people at a time. The mosaic tiles were imported from Britain and are of six different colors. Italian masons from Bombay were engaged for laying the decorative flooring. Massive pillars built with fine-hewn and well-dressed grey stone support the gallery and the whole edifice. The roof of the church is made sound-proof by means of hollow sponge material and has an impressive style of vaulting. The surface of the vaulting has the shape of squares. A window depicts the birth scene of Jesus, angels, Prophet or Issaiah, Mary and astrologers. The left side of the church bears the painted crucifixion scene and in the center, the ascension of Jesus is painted bright. Each window is made up of several bits of stained glass delicately set into the massive stone windows. The window to the north which offers a canopy to the altar is awesome. The bell-tower is 175 ft (53 m) high. (It is said that when the Nizam of Hyderabad discovered that the church would be higher than the Charminar, he made a vain bid to have its height reduced. There are six different colors of mosaic tiles that were imported from England and used in the church’s flooring. This magnificent white granite structure not only stands for peace but a great example of Gothic architecture in India and South-east Asia. 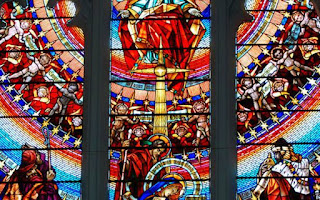 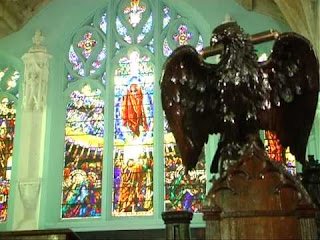 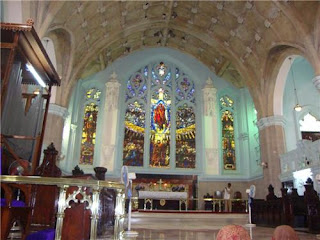 The cathedral is open daily from 7 am to 6 pm for public viewing and silent prayer.

By Air: Hyderabad (100 km) is the nearest airport to Medak.

By Train: Kamareddy (60 km) is the nearest railhead to Medak. And Secunderabad (100 km).

By Bus: Medak church is 100 Km from Hyderabad. This place is accessible by plenty of buses from Secunderabad and Hyderabad Bus Stations. One can also drive to this place to get a feel of the village environment.